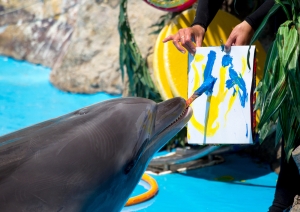 After quite a bit of trial and error, I think I’ve outsmarted the squirrels in my front yard – at least for a while.  Now that the bears have holed up for the winter, I’ve put out the bird feeders and what with sunflower seeds and peanut-embedded suet cakes within eyeshot they’ve risen to the challenge.  It’s been something to watch,  but a forty dollar Lexan umbrella over the sunflower seed feeder and a slathering of canola oil on the metal post that holds up the suet seems to have foiled them, at least for now.

The suet pole is located near the tip of a slender, flexible apple tree branch.  A squirrel tightropes out much of the way and studies the suet but then retreats despite the fact that she is within 3 feet of her goal – a distance that I’ve seen her easily cover from other more solid launch sites.  What’s holding her back, I think, is the branch’s flexibility which would absorb much of the energy of her leap.   Is she really just pre-programmed to take the distance, her leapability and the stability of her launching platform into account or is there something more complex going on?  If so, that seems like a pretty sophisticated conscious calculation.

There has been much written lately about animal minds, and I am not speaking here about Harvey Weinstein and his ilk.  In Beyond Words, ecologist Carl Safina, writing with his usual grace, assembles a mountain of careful observations to build a convincing case for complex feelings and thoughts among elephants, wolves, orcas and other species.  http://carlsafina.org/book/beyond-words-what-animals-think-and-feel/ Jennifer Ackerman – an equally gifted writer – takes a similar tack  in The Genius of Birds, focusing especially on corvids and parrots. In addition to observations about avian thoughts, feelings and problem-solving, Ackerman makes a powerful case for a true aesthetic sense among the bowerbirds of New Guinea and Australia. http://www.jenniferackermanauthor.com/genius-ofbirds/  On more personal notes,  Lynda Lynn Haupt’s up very close and personal observations of a pet starling inspires her to research the relationship between Mozart and his own bird pet bird in Mozart’s Starling https://www.thirdplacebooks.com/event/lyanda-lynn-haupt-mozarts-starling, while Helen MacDonald in H is for Hawk details the complex relationship between the goshawk she is training and her own grieving spirit,  noting along the way how the bird’s eyes laugh while playing with a toy she’s made for it.  In a Zen-like drift she gradually comes to actually think like the bird when the two hunt together.  https://www.nytimes.com/2015/02/22/books/review/helen-macdonalds-h-is-for-hawk.html  And recently the New York Times science section ran a video showing dolphins goofing around in front of a one-way mirror and reported that these animals developed self-awareness well before humans https://www.nytimes.com/2018/01/10/science/dolphins-self-recognition.html

It is difficult to come away from reading these four books and watching that video anything less than convinced that elephants grieve, wolves cooperate, orcas have sophisticated communication methods, dolphins have fun, crows and jays have advanced puzzle-solving capabilities and bowerbirds appreciate certain kinds of art when they see it.   With this explosion of similar information it is hard not to believe that we humans have been selectively blind to animal emotions and thoughts for a long time, though that should come as no surprise, really, given our stubborn insistence on our incredible superiority –  from the days of believing the universe rotated around us onward.  Humility has never been what the “H” in  H.sapiens has stood for.

There  is  quite a list of candidates which have been held up historically as the quality which makes us superior. Opposable thumbs, tool making, language, altruism, etc have all had a run until some naturalist finds another species that has the same quality.  Granted, we are better at some of those than any other species, but what is it that makes those particular qualities the special ones.  There are plenty of other things we aren’t very good at like finding our way to  a small atoll in the southern hemisphere after spending a couple of years soaring over the Pacific Ocean or recalling the exact spots where we’ve buried a winter’s supply of hazelnuts in the forest floor the previous summer.

What it may come down to, perhaps, is a super-tautology:  we are unique because we possess a unique set of abilities ( just as every other species has its own unique set.)

Another way of thinking about what makes us special is the way we exploit.  Of course every creature has to sustain itself.  Herbivores eat plants.  Carnivores eat meat. Omnivores eat everything.  And some species of ants keep slaves and keep herds of aphids.  But we humans have taken exploitation of our environment to a new level.  We have our prey, of course, but what about our clothes, our shoes, the horsepower and oxpower that led us to the industrial revolution, those ships of the desert and water buffalo that are still in use today, the bomb sniffing dogs, the homing pigeons carrying coded messages over enemy lines, the generations of great whales that lit our lamps and oiled our machinery?  And that’s just a list of the exploited animals.  Consider all those plant fibers that make up most of our textiles, the palm leaves fanning pharaohs, the chocolate bean husks mulching our gardens.  And we’re still talking just about biota.  Now think of the water we consume manufacturing, the mountaintops we remove mining.   Compared to all those other life forms which get by pretty much entirely on their own except for the nutrients necessary to sustain their metabolism,  we are exploiters without equal. Though it may not be something to boast about,  it is beginning to look as though that massive exploitation is the quality which separates us from the rest of life on earth!  – the elephant in the room until now because it is such an ignoble quality.

Of course exploitation need not be all that bad if you can sanctify it in some way.  Conceptualize a truly supreme being to which all else is by definition vastly inferior. Imagine yourself made in his or her image – though with a few imperfections.  Then be given authority by that power to have “dominion over the fish of the sea, and over the fowl of the air, and over the cattle, and over all the earth, and over every creeping thing that creepeth upon the earth.” Pretty heady stuff.  Makes a virtue of exploitation.  And once you have that supreme being in whose image you’ve been created, it’s easy to set up a hierarchy that values other bodies and minds better or worse in proportion to how they resemble your own.

Clinging to that belief of a hierarchy is pretty convenient.  Without it a great many of our ethical foundations are candidates for rearrangement.  If animals, or at least many animals , are more than unfeeling unselfconscious automatons;  if they do indeed, experience grief, terror, security, love, beauty or even feel intimations of immortality it’s kind of disquieting to continue with business as usual.  Just look at all the trouble caused by the realization that human bondage was really, really wrong.

I’m not at all sure where this is all going to lead.  I like my steak just as much as anyone and I don’t think Zinke is going to become a tree hugger any time soon. But I do sense  some movement.  It may take a while to sort all this out but I think a couple of generations from now we are going to be leading very different lives.

Post Script:  As I’ve been mulling over these conundrums, that squirrel  has figured out that if he tries to climb up that slippery pole enough times he’ll eventually rub off enough grease  to be able to shinny all the way to the top and gorge on that suet – successfully exploiting the exploiter of Bos taurus who hung it there.