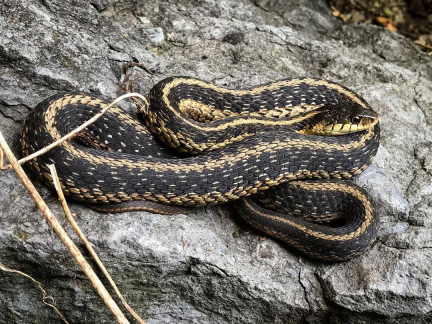 I have a friend who coaches football when school is in session.  In the summer, he rebuilds New England stone walls and he has the physique and temperament for both jobs.  Unfortunately, however, snakes terrify him and snakes tend to live in stone walls.  My friend is aware of this and knows full well that almost all snakes in New Hampshire are entirely harmless, but on lifting a rock under which a small garter snake is sleeping peacefully, he inevitably screams, drops the rock, and leaps away;  then looks around sheepishly to see if anyone saw his reaction.

He shouldn’t be ashamed.  To one degree or another, all of us are wired this way.  Big spiders move us to action.  So does being suddenly confronted by a threatening face.  The sound of footsteps behind us on a dark night gets our attention. And most of us, surprised by a snake, would react as my friend does.

In 2008, some psychiatrists and bioengineers at Stonybrook University in New York taped gauze pads to the armpits of individuals about to take their first tandem sky-dives.  Immediately after the neophyte divers hit the ground the gauze pads were collected and sealed in containers designed to prevent  desiccation  and bacterial growth. Later, armpit sweat was collected the same way from the same individuals after a vigorous treadmill run of the same duration as the flight.  Subsequently, a different group of volunteers were asked to sniff the stuff and then rate how threatening a series of ambiguous facial expressions were and also undergo MRIs.  A whiff of the post-skydive armpit sweat registered a greater likelihood that a facial expression would be interpreted as intensely fearsome as well as more MRI activity in parts of the brain known to be related to emotional intensity.

You don’t have to be an evolutionary biologist to make sense of this.  Fear, after all, is adaptive.  If suddenly confronted with a creature  which has been killing our forebears since they swung from branches, it makes sense that we are programmed to leap away before putting our rational mind to work considering the probabilities.  And a good simultaneous scream warns other troop members to be en garde. At the same time, electric impulses shoot through sympathetic nerves, speeding up  heart rate and telling your adrenal glands to dump all the adrenalin it has into your bloodstream to prepare you to fight or flee.  All very reasonable.  So why not add to the armamentarium a blast of chemical signals saying “Yipes, danger!”

With climate change, however,  it’s another story. No serpentine forms. No loud noises.  No scary surprises.  No big creepy crawlies.  Merely a steady slow-motion march towards the destruction of all life on earth!

You would think that prospect would terrify and spur us to action but we just don’t pay much attention to things happening at that speed.  Trees grow like that.  So do children.  And to some extent that’s the rate at which we age.  Imperceptible from day to day; but look back ten or fifteen years and those white pine seedlings have become big trees;  that eight year old grandchild is in college; and when did my nose hairs start to grow out instead of in?

The evidence that we are headed to big trouble is everywhere – except, of course, when we’re in the comfortable fabricated indoor environments we’ve created for ourselves or in the climate controlled cubicles where the majority of us spend most of our working hours.  In those two spots we are essentially removed from the “real” environment and have grown  accustomed to the one we have created for ourselves.  Four walls and a roof fend off the elements, our HVAC servo-systems keep our environment right in the middle of our comfort zone, and the vast majority of us are fully confident that our next trip to the grocery store will find every shelf full. Nothing even vaguely close to being startled by a snake.

But if you’re old enough, and have lived in the same spot for most of your life; if you are a gardener, or a birder;  if you’ve got a streak of the hunter gatherer in you and like to forage for morels, pick mussels from the rocks at low tide or cast a lure for striped bass on their fall migration or you’re a weather junkie who has kept your own record of meteorological data and catastrophes over the years, you don’t have to plough through geophysical research papers or even believe the lay press to know that radical changes are afoot. The morels appear earlier, the bass head south later and we keep breaking temperature and hurricane records.   If you combine those two sources of “knowing” –  if you have been a reasonably careful observer of the world outside your office and home for six or seven decades and read the lay press and an occasional scientific report –  then you are probably ready to scream in terror like that scared football coach.  And unlike being suddenly startled by the surprise appearance of a harmless snake, applying your rational mind to the problem of climate change makes you more terrified, not less.

In the past decade, there have been no publications replicating this study of frightening body odor nor any which have sought to isolate the offending compound.   The small print of the 2009 article reveals that the work was funded by the U.S Army.  One can only wonder if there is not now an active research program in some top secret military lab working to mass produce a substance which can be sprayed on the enemy to precipitate panic and retreat.  Of course, a better use of such a material would be to include it in mailings by organizations trying to motivate people to vote for legislation to promote sustainable energy, keep fossil fuel in the ground and prevent the release of greenhouse gases!